Posted by Heni Jmel
Find me on: LinkedIn

From driverless cars to train tickets implanted in our hands, the ways we move around is changing. It’s estimated that the AI industry will be a near $60 billion market less than ten years from now. In this blog post we will highlight 7 ways that AI is revolutionising the Transport Industry.

AI refers to the simulation of human intelligence in machines that are programmed to think like humans and mimic their actions.

The term can also be applied to any machine that exhibits traits associated with a human mind such as learning and problem-solving.

All of these qualities have the potential to overhaul and improve the way that we use transport every single day.


A mere twenty years ago, you’d have been laughed at for entertaining the thought of self-driving cars. But now we’re now literally driving towards the future with a range autonomous cars!

Tesla, BMW, and Mercedes have already launched their autonomous cars, and they’ve proven to be successful.

What was once a pipedream is now very much a reality as we’re set to see these vehicles prominently on the roads by the end of 2019.

“I think we will be ‘feature-complete’ on full self-driving this year, meaning the car will be able to find you in a parking lot, pick you up, take you all the way to your destination without an intervention this year.” - Elon Musk

Self driving trucks and driverless buses are also on the horizon. This means we can expect to see the way we use public transport and how our goods are delivered being completely transformed.


We’ve all been there, sitting in a traffic jam that seems to go on for miles, wondering if the lights are ever going to change to green!

Well, machine learning is now being used to prevent traffic jams, systems can now process complex data and recommend the best route for travelers. Traffic cameras can be used to send information back to a control center, where algorithms can estimate how much traffic is on the road. This information can then be used to alter traffic lights to suit real-time road congestion.

One particularly interesting/promising traffic flow management tool is Surtrac. Designed specifically for urban areas, it allows lights at intersections to respond to vehicle flows on an individual level, instead of as part of a centralized system.

It seems that the impressive technology of the likes of the ‘Oyster Card’ may soon be surpassed! Chips can now be implanted into travelers hands, which can be scanned on entrance and exit fare-gates at train stations.

Commuters in Sweden have been testing microchip implants as tickets, SJ trains have even started scanning the hands of their passengers on board their trains.

The chips alleviate the need to stand in line and never again will you be caught without a ticket!


These number plates will be a smart upgrade for your car, by not only displaying your information but linking digitally to a number of services

The number plates use GPS to track your location and even sync with your bank account to pay for any fines. As well as convenience, this advancement would help cut down on car theft and other motor vehicle related crimes.

A massive 100,000 of these digital plates are ready to be rolled out in the US this year, and predictions say they’ll be replacing our standard number plates in the near future.

Gone are the days of holidays being ruined when you get to the airport and realize you’ve forgotten your passports! Because airports could soon be getting rid of passports altogether, in favor of advanced facial recognition technology.

The scanners are already being used in some US airports, but concerns about accuracy have halted international roll out of the technology. There's also a significant amount of controversy surrounding face-scanners and how they could impede on the privacy and freedom of passengers.

So, other airport related technology such as Google Flights is being implemented to help advance the flying experience. The app is being used to help better predict flight’ delays, and could soon know that a flight is going to be delayed before the airline even knows.

Sony are launching and AI Ride Hailing service in Japan, the proposed service will use AI to manage fleets. Sony are set to partner with five taxi companies across the company and aim to have cars that can both be driverless and manned by humans.

AI will be used to manage dispatches and predict demand based on a variety of factors.

The cars will be able to give an overview of potential issues like traffic jams and detours due to events, and react accordingly.


This isn’t something we’ve taken straight from a movie script, Ford have issued a patent for AI driven police cars. The design features AI technology that allows an official unmanned vehicle to issue tickets and violations to speeding cars . This is actioned by cameras and lenses scanning registration numbers and accessing CCTV footage.

Law enforcement in Dubai are using smart technologies across their police forces, with smart police cars using face-scanning and machine learning. Their cars also come with thermal imaging and license plate reading technology and Police officers can also step in and control the car behind the dash if need be.

With massive breakthroughs in smart technologies being reported every month, it won't be long until all of our transport industries are dominated by AI. 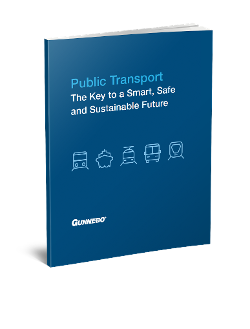 Imagine your perfect commute to work, does that involve a flying car or a hoverboard?  Or an intelligent gate using AI to control the flow of people? Well, with advancements moving as quickly as the examples above, you never know what the future may hold!

For more information about the role that public transport can play in developing a brighter, more sustainable future for everyone, download our free eBook - Public Transport: The Key to a Smart, Safe and Sustainable Future.